Employees use coins to recognize co-workers for safety and service

NS commendation coins give personal meaning to safety and service

It had no monetary value, but a small coin tucked in a letter from a former supervisor made a big impact on 36-year railroader Steve Nettemeyer. As of mid-2016, Nettemeyer, a transportation foreman at Roanoke Terminal, is one of about 250 Norfolk Southern employees who have received commendation coins that are an offshoot of NS’ “i am Coming Home” safety message. 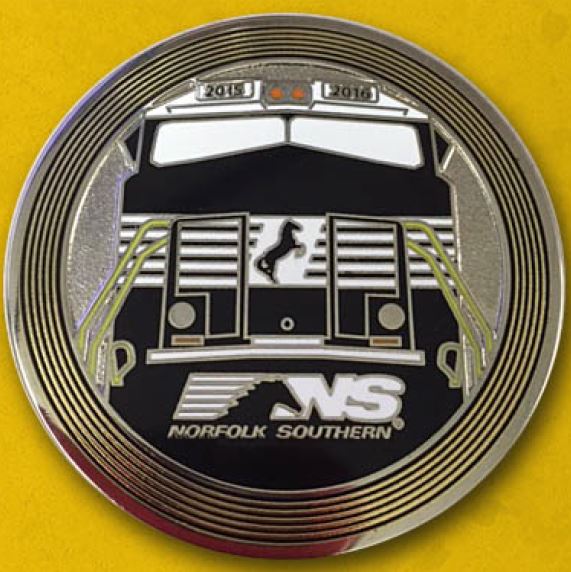 Emblazoned with an NS locomotive on one side and “i am Coming Home” on the other, the limited-edition coins have become a coveted accolade, said Karin Stamy, system director safety. Similar in design and purpose to military commendation coins, they usually are given via a handshake, with the giver stating specifically why the recipient was selected for the recognition.

“They’re intended to have a lot of meaning but not a lot of fanfare,” Stamy said. “You become a member of a small group if you get one.”

A ‘blueprint’ for good working relationships

Nettemeyer said he was grateful to be inducted into the coin club. “It means more to me than gold,” he said. “I was honored and felt good that somebody recognized my effort and ability.”

“It’s a great opportunity to highlight special achievements of individual employees and an opportunity for them to pay it forward to someone else.””

That someone was Justin Meko, currently Illinois Division superintendent. Meko was Nettemeyer’s supervisor during a stint as Roanoke Terminal superintendent from 2011 to 2013. The two often discussed ways to improve productivity and the terminal’s working environment. Meko said he gave Nettemeyer a coin because he appreciated Nettemeyer’s candid feedback and professionalism, even when his comments were not so complimentary.

“The assistance he provided me and the insight he gave me when I was terminal superintendent helped groom my leadership style,” Meko said.

In turn, Nettemeyer appreciated Meko’s willingness to listen to his ideas and opinions. “I never had a relationship with a supervisor like the one I had with him,” he recalled. “We sat down when there were problems and brainstormed together. He treated me as an equal, not a subordinate, and made me feel that what I was doing was important and had value. It made me be the best employee I could possibly be.”

Upon receiving coin 0012, Nettemeyer sent Meko a three-page letter thanking him for empowering him as an employee. “Together Mr. Meko and I were able to affect positive change,” Nettemeyer wrote. “We were able to target some areas where the company could save money while improving overall productivity and creating a more positive working atmosphere on the Roanoke Terminal. Our working relationship should be a blueprint of how good it can be.”

A way to highlight achievement

Commendation coins are especially meaningful to Meko, a military veteran, who has received coins from Todd Reynolds, general manager Western Region, and David Julian, who retired earlier this year as vice president safety and environmental. Reynolds recognized Meko for leading the Illinois Division in safety, train performance, service, and cost control. Julian gave Meko a coin to recognize his positive interaction with employees during an Operations Division Safety and Service Committee tour of Decatur Terminal. Meko has passed along nine coins and always carries one to give to an employee he sees positively impacting NS’ safety or service performance.

A way to highlight achievement

“It’s a great opportunity to highlight special achievements of individual employees and an opportunity for them to pay it forward to someone else,” said Meko. “I tell them to give it to somebody who went the extra mile to move the needle. Don’t allow it to go unnoticed.”

Andy Cox, a dispatcher on the Illinois Division, often thought his efforts directing train movements out of the Decatur office went unnoticed. Then Crystal Brinkley, trainmaster, presented him with coin 0787.

“I show up for work every day, and sometimes I pull some magical dispatching moves, and no one acknowledges it,” Cox said. “To get some recognition for my hard work was very appreciated. It meant a lot to me.”

Cox paid his coin forward by giving it to Patricia Incarnato, a fellow Illinois Division dispatcher who trained him when he moved to the dispatch desk 16 years ago after working as a conductor and engineer. “She works a very busy desk and puts on her thinking cap every day and is always very thorough and focused,” he said. “I had this nice coin and thought this was finally a way to say ‘Thank you.’ ”

NS produced 1,000 coins, each uniquely numbered, and distributed them to operations supervisors to present to employees for outstanding performance in safety and service. Recipients who pass the coins to co-workers can receive replacement coins. A URL address on the coin directs bearers to an NS web site where they can register their coin and share the presentation story. Each person receiving the coin can add to its history as it travels across the railroad’s network.

“Everyone likes to be recognized for a job well done. Having an executive or peer hand you a coin and express appreciation for your work is pretty cool.”

Meko, Nettemeyer, and Cox are among recipients who have shared their stories on the website. “Some of the stories are really emotional,” said Larry Cox, manager operations division systems. Cox, who has collected military commendation coins for more than 30 years, came up with the coin idea and designed the website.

“Everyone likes to be recognized for a job well done,” Cox said. “Having an executive or peer hand you a coin and express appreciation for your work is pretty cool. It’s not something everyone has, and that makes it more special.”

While most of the coins have gone to employees for their efforts to ensure a safe, efficient railroad, some are presented for more personal reasons. On Father’s Day two years ago, Robert Farmer, an engineer on duty at Brosnan Yard in Macon, Ga., began having trouble breathing. “I thought I could just brush it off, but it got worse,” he recalled. Farmer called yardmaster Samuel T. Scoggins.

“He came down out of the tower right away and got me in his personal vehicle to take me to the hospital.” On the way, Scoggins saw a fire truck and pulled over so firefighters could administer oxygen to Farmer. “It was very scary, but Sam came to my aid. If it wasn’t for him, I don’t know what would have happened.”

When Farmer received coin 0613 from Melvin Crawley, superintendent Georgia Division, for his work on the division’s diversity and inclusion council, he immediately knew that he would pass it on to Scoggins. “Sam was very modest about it and said he didn’t need recognition,” Farmer said. “But he’s my hero. He takes “i am Coming Home” to the next level.”

While the number of coins is limited, Stamy said the program will continue as long as they pass from employee to employee.

“We want to give employees an opportunity to talk about safety and why it matters to them,” she said. “If the coins are something people really like, we’ll keep the program going. We’re curious how many times these coins can be passed.”